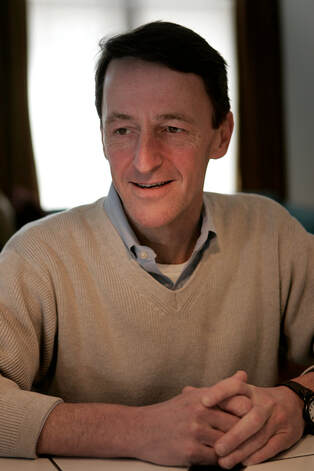 ​Giving a gift in tribute...
Make a gift to the Cambridge Public Library in honor or memory of someone you love, and we’ll send a hand-written acknowledgement to them or to someone else of your choosing.

Doing good AND feeling good? That’s something we can all use a little more of! Tribute gifts can be made easily and securely through our online portal.

Here are the stories of two dear friends whose legacies live on through gifts made in their memory. These tributes to Michael Downing and Monica Klien originally appeared in the Library Foundation’s 2021 and 2020 Community Reports, respectively.

Michael Downing, a renowned author, Cantabridgian, and friend of the library, passed away in February 2021 at the age of 62. Michael was a prolific and award-winning author of nine books, two plays, and many essays and articles on a wide range of topics. His 1997 book Perfect Agreement was a national bestseller and was named one of the 10 Best Books of the Year by Amazon.com and Newsday. Breakfast with Scot, a comedy about two gay men who become parents, was named an American Library Association honor book and was adapted into a feature film that premiered at the Toronto International Film Festival.

A cherished creative writing professor at Tufts University, Michael began visiting the library in the late 1970s, and it quickly became a second home. Michael admired the library as a welcoming place that served the broader community and had the ability to change the trajectory of people's lives. Before his passing, he wrote: “That to me is the project of a life—to change, and to be changed by the people you encounter.”

Peter Bryant, Michael’s partner of 39 years, started the Michael Downing Fund at the Foundation in early 2021. “When people started to contribute to the library in Michael’s name, I wanted those gifts to live forever, funding the critical work that the library does every day. I am so proud to establish this legacy for Michael in a place that he loved, that inspired him and that he felt so deeply connected to.”

The Foundation is honored to remember Michael with this special tribute and to recognize those who gave this year in his memory. The Michael Downing Fund will live in perpetuity in the library’s endowment, ensuring that the library is able to prioritize literacy, innovation, and access to the free pursuit of knowledge for generations to come.

Remembering Monica Klien (1958-2020)
Monica Klien, a beloved member of the Cambridge Public Library’s English as a Second Language (ESL) family, passed away in January 2020. A professor of languages and Latin American literature who taught at Georgetown University, MIT, and Wellesley College, Monica started teaching ESL at the Library in 2015 and described it as the most rewarding experience of her career. “I feel alive,” she wrote, “connected to these people who give thanks after every class without knowing I am a volunteer…I feel connected to them by the purest form of transmission, without all the constraints that many American higher education institutions have fallen into. Yes, yes, I give these students a little. I wonder if they know how much they give me.”
​
Monica was born and raised in Peru and so, like her students, she discovered English as a secondary language. Monica taught ESL at the Library until weeks before her death and many of her friends and family honored her life with a gift to the Library Foundation. A bright light gone too soon, we are honored to remember Monica with this special tribute and to recognize those who gave in her memory. 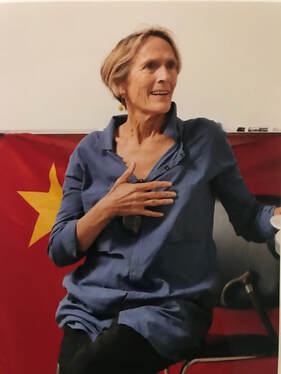